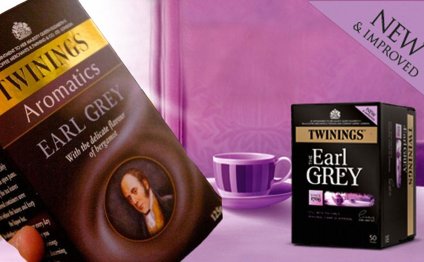 is a black tea flavored with oil from the peel of the bergamot orange (Citrus bergamia). The tea is named after Charles Grey, a prime minister of the UK who was a member of the Whig party.

Most Earl Grey tea is made, as it was historically, with black tea, typically a Ceylon. Recently, as green and black teas have increased in popularity, green and white varieties have also become available. This style has even inspired Earl Grey rooibos, a caffeine-free herbal blend produced by substituting rooibos for tea.

Earl Grey tea has a strong and distinctive aroma that renders it easily recognizable as its own style, regardless of what variety of tea is used as a base. Many different varieties of black tea are used as the base for this tea. The amount of bergamot oil used also varies widely, ranging from blends where bergamot dominates the aroma to teas with only a hint of bergamot.

Earl Grey tea is a favorite of Captain Jean Luc Picard in Star Trek: The Next Generation.

Although tea enthusiasts generally know that Earl Grey is flavored with the Bergamot orange, deeper knowledge of this variety of orange is not common in the world of tea. The Bergamot orange is likely a hybrid of Citrus limetta (Mediterranean sweet lemon) and Citrus × aurantium (Bitter orange), which is itself a hybrid.[1]

This orange is mostly cultivated in south Italy, mostly concentrated in a very small stretch of land in Reggio Calabria. Other regions of production include Ivory Coast, southern France, and Antalya Province of Turkey. For Earl Grey tea production, the peel of the orange is pressed and the essential oil extracted; this oil is then used to flavor tea.

The fruit flesh itself is used in marmalade, and the juice is used for medicinal purposes, but not drunk as a beverage.

The bergamot orange is not closely related to the "bergamot" plants (Monarda sp.), "wild bergamot", "Oswego tea", or "bee balm", which are all native to North America and in the mint family. These plants, however, have a very similar aroma, and make excellent herbal teas.

These herbs can also be blended with black tea to yield a flavored tea closely resembling Earl Grey tea. The variety on the right, Monarda didyma, is sometimes called Scarlet Bergamot for its scarlet blooms. This species was used as a substitute for black tea following the Boston Tea Party.[2]

Earl Grey is a black tea and thus has similar effects on health to other black teas. However, oil of bergamot also has other bioactive properties and may have other health benefits. Although it has not been extensively studied, some preliminary research shows that it may have neuroprotective effects, protecting the brain against damage caused by a chemical known to damage neurons.[3] 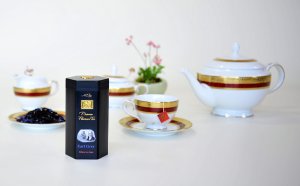