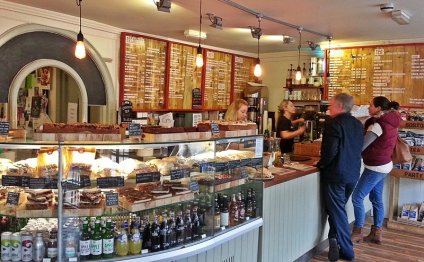 How did the Sons of Liberty disguise themselves at the Boston Tea Party?

American Indians.
In an effort to hide their true identities, many of the Sons of Liberty attempted to pass themselves off as Mohawk Indians because if caught for their actions they would have faced severe punishment. Reports from the time describe the participants as dressed as Mohawks or Narragansett Indians. The disguise was mostly symbolic in nature; they knew they would be recognized as non-Indians. The act of wearing “Indian dress” was to express to the world that the American colonists identified themselves as “Americans” and no longer considered themselves British subjects. They were not dressed as Indians in the classic sense with headdresses and full authentic regalia; rather they wore wool blankets matchcoat style, painted their faces with soot, and employed other modes of dress commonly known at the time as “Indian dress”, which had been adopted by soldiers during the French and Indian War. An observer of the Boston Tea Party, John Andrews wrote the following in 1773: “They say the actors were Indians… Whether they were or not to a transient observer they appear’d as such, being cloth’d in blankets with the heads muffled and copper color’d countenances, each being arm’d with a hatchet or ax, and pair pistols, nor was their dialect different from what I conceive these geniusses to speak, as their jargon was unintelligible to all but themselves.” Boston Tea Party participant George Hewes recorded the following: “It was now evening, and I immediately dressed myself in the costume of an Indian, equipped with a small hatchet, which I and my associates denominated the tomahawk, with which, and a club, after having painted my face and hands with coal dust in the shop of a blacksmith, I repaired to Griffin’s wharf, where the ships lay that contained the tea. When I first appeared in the street after being thus disguised, I fell in with many who were dressed, equipped and painted as I was, and who fell in with me and marched in order to the place of our destination.”

How many ships were involved?

Three.
On the night of the Boston Tea Party, three ships that had sailed from London carrying cargoes of British East India Company tea were moored in Boston Harbor. The three ships were the Beaver, Dartmouth, and Eleanor. The Dartmouth arrived in Boston on November 28, 1773, the Eleanor on December 2, and the Beaver on December 15. Each of the three ships carried more than one hundred chests of British East India Company tea. The Sons of Liberty on the night of December 16, 1773, offloaded the tea cargoes of all three ships.
There were to be four ships sailing from London carrying cargoes of British East India Company tea to Boston, but the William ran aground off Cape Cod on December 10, 1773 in a violent storm. The cargo of 58 chests of British East India Company tea was salvaged before the William was abandoned. A portion of the salvaged tea cargo ended up in Boston and was later destroyed by the Sons of Liberty. Samuel Adams recorded the following about the fate of the William: “The only remaining vessel which was expected with this detested article, is by the act of righteous heaven cast on shore on the back of Cape Cod, which has often been the sad fate of many a more valuable cargo.”
If you would like more information about each of the ships, visit these links to dedicated pages:

Were the ships British?

No.
A popular misconception is the belief the Tea Party Ships were British. In fact, the vessels were built in America and owned by Americans, but the cargo of tea they were carrying from London to Boston was owned by the British East India Company. The Beaver and Dartmouth were built and owned by the Rotch’s, an affluent Nantucket Quaker family. The Eleanor was one of several vessels owned by leading Boston merchant, John Rowe.
Learn More

Where did the tea come from?

China.
Contrary to popular belief, the British East India Company tea the Beaver, Dartmouth, and Eleanor transported to Boston was not from India. The tea the Sons of Liberty dumped into Boston Harbor was in fact from China. In addition to India, the British East India Company had extensive dealings in China because of the lucrative opium trade. The tea destroyed during the Boston Tea Party was described as “Bohea” type. In the 18th century tea trade, black tea was referred to as “Bohea.” Traditionally, the Bohea variety of black tea came from the Wuyi Mountains in the Chinese province of Fujian, but the term “Bohea” was hijacked by the tea trade to refer to all black tea varieties. The black teas (“Bohea”) the Beaver, Dartmouth, and Eleanor transported were of the Bohea, Congou, and Souchong varieties. Additionally, they also transported Hyson and Singlo teas, which were both green teas from the Chinese province of Anhui. The shipment of British East India Company tea the three ships delivered to Boston consisted of 240 chests of Bohea, 60 chests of Singlo, 15 chests of Congou, 15 chests of Hyson, and 10 chests of Souchong.

We know Patriots were loyal to the American colonies, but what were people who remained loyal to Britain called?

Tories, Loyalists, Royalists, or King’s men.
The terms Tory, Loyalist, Royalist, or King’s men were used by Patriots to label those who remained loyal to the mother country Britain. The word Tory comes from several Middle Irish words meaning robbers, outlaws or pursued men. Prior to the American Revolution, the term Tory evolved into describing those who upheld the right of the King over Parliament, and during the Revolution took on the form to describe anyone who remained loyal to Britain. The most famous Boston Tories and targets of the Sons of Liberty were public official Andrew Oliver and Lieutenant Governor and Chief Justice of Massachusetts Thomas Hutchinson. During the American Revolution, it is documented that over twenty thousand Tories took up arms and fought with the British Army against the Patriots. They were branded traitors for remaining loyal to their king and fighting for what they believed in. When American independence was achieved at the close of the American Revolution, many Tories either fled or were kicked out of the newly formed United States and relocated primarily to Britain, Canada, the Bahamas, and Africa where they founded Sierra Leone. During the American Revolution it is estimated one-third of the population of the Thirteen Colonies were Tories, one-third were Patriots, and one-third remained neutral.