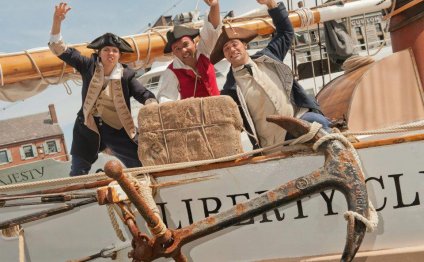 Ticket holders join an authentic, spirited and theatrical colonial meeting at Old South Meeting House to protest the colonial tax on tea, just as unprecedented numbers of colonists gathered in this very building 242 years ago. Samuel Adams, John Hancock, Paul Revere and other Patriot leaders join in a fiery debate with crown-loving Loyalists in this final attempt to peaceably resolve the crisis as the deadline to pay the tax approaches.

Visitors are encouraged to join the debate letting their voices be heard and joining in the vote in the very place where Liberty found her allies!

Led by fife and drums, the public is invited to march from the Old South Meeting House to Boston Harbor where Griffin’s Wharf once stood with the Sons of Liberty and re-enactors along the same route these Patriots walked to Boston Harbor (Milk St. to Congress St. to Pearl St.) to destroy the tea! Along the way, more colonist re-enactors will join the procession.

The public is invited along with the re-enactors to line the shores of Boston Harbor and watch as the Sons of Liberty storm aboard the Brig Beaver and destroy chest after chest of East India tea, just as colonists did 242 years before. When the Sons of Liberty arrive, they have an exchange with a Customs Officer and Captain Coffin, the captain of the Brig Beaver, before boarding the ship, open the hold and hoist tea chests on deck. Tea chests are broken open and the contents spilled into Boston Harbor. Viewers are encouraged to yell “Huzzah” as each chest is dumped into Boston Harbor as they witness the dramatic conclusion of the single most important event leading up to the American Revolution. This fully-narrated program lasts about 30 minutes.

Tea Party Reenactment at the Boston Tea Party Ships and ...